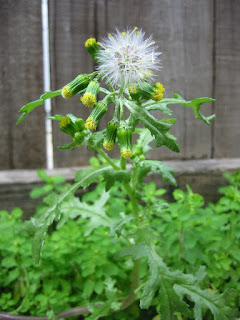 Groundsel or Senecio vulgaris is a member of the daisy family, described by Watts as “an ubiquitous weed” (177).  It resembles dandelion in having yellow flowers which give way to round seed puffs, but the flowers are smaller, appear in multiples on a central branch, and never open fully; the plant itself can grow up to 18” or taller. The common name is derived from the Anglo-Saxon grundswelgei, “ground glutton” (Folkard 188) or “ground swallower” referring to the ease with which it spreads.[1]  Groundsel has numerous folkloric associations with witches, one of the more amusing is explained by Watts: “A small patch growing beside an old roadway showed that a witch had stopped there to urinate” (177). In her charming book on Weeds, Nina Edwards remarks that “Groundsel is welcome green food for caged birds,” but also explains some of the negative features of the plant: “the allotment holder applies the hoe to a plant that harbours leaf rust and a fungus that causes black root rot in peas” (Kindle edition, 131).

These latter two associations are the ones applicable to Woolf who mentions groundsel only three times: once in her diary, once in an essay, and once in a letter.  While Woolf was not much of a gardener, she did enjoy helping out from time to time by doing a spot of weeding.  In September of 1919, isolated in Sussex because of the Railway Strike, Virginia and Leonard took great pleasure in working in the garden at newly acquired Monk’s House, and she describes making a game of weeding to clear the ground for new seeds: “The worst is the fine grass which has to be sifted out conscientiously. I like uprooting thick dandelions & groundsel” (D1 302).

The other two mentions are references to groundsel’s use as bird-feed.  In her 1925 essay on Lady Dorothy Nevill for The Common Reader, Woolf consistently describes the circumscribed nature of the Victorian aristocrat’s life as being confined “to a bird-cage”: “More and more do we see Lady Dorothy hopping from perch to perch, picking at groundsel here, and at hempseed there, indulging in exquisite trills and roulades, and sharpening her beak against a lump of sugar in a large, airy, magnificently equipped bird-cage” (E4 203).

Woolf describes herself in similar terms in a flirtatious, rather overly witty letter to Clive Bell in January of 1928: “With Clive away its like a cage where they’ve forgotten to give the poor bird its groundsel. She has corns on her toes: she hops: she moults” (L3 454).

[1] The University of Wisconsin, Madison, Master Gardener Program has a most informative site on Groundsel:  https://wimastergardener.org/article/common-groundsel-senecio-vulgaris/