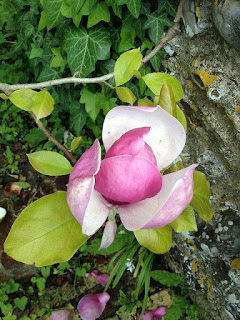 A magnolia at Monk’s House

Magnolias are amongst the oldest of flowering trees. The Magnoliacae family, including about one hundred species and countless hybrid varieties, dates from before the ice age, its flowers being so primitive that they are largely pollinated by beetles rather than bees, which only evolved later (Hogan 850).[1]  The flowers are large, simple and open, sometimes fragrant, mostly white with the occasional pink blush, and they bloom in April, about the same time or a little earlier than azaleas. In some species, the flowers appear before the leaves, showing dramatically against the bare branches; unprotected, however, they are often damaged by “wind and late frosts” (Hogan 850).

Native throughout Asia and North America, the first magnolias were brought to Kew Gardens in 1769 (Desmond 42), and included many Asian varieties as well as the enormous Magnolia grandiflora from the southern United States which grows as high as ten meters or thirty-five feet and is notable for its glossy, deep green, leathery leaves surrounding highly fragrant, enormous saucer-shaped white flowers (Hogan 851).[2]

The cultivation of magnolias at Kew is particularly significant to Woolf; of the eighteen magnolias she mentions -- eight in her fiction, three in essays, and seven in diaries -- no fewer than ten are explicitly located in Kew Gardens.[3]

Woolf’s first magnolias appear in her first novel, the Voyage Out, where, in an incorrect nod to its North American origins, Woolf places what is clearly a Magnolia grandiflora in the midst of the landscape of South America. At the end of Chapter Fifteen, a great magnolia tree with “heavy wax-like flowers” becomes part of the visual pattern in which Helen Ambrose and Terence Hewitt have a conversation about Hewitt’s future (Harcourt 208; Oxford 235).  The impression of the tree is both painterly and structural; Helen notices “the patches of shade and the shape of the leaves, and the way the great white flowers sat in the midst of the green” (Harcourt 209; Oxford 235). In the British edition the whole passage is introduced with a strategic placement of Terence’s head against the tree, suggesting a kind of identification of the young, privileged white man with the waxen, slightly artificial flowers: “Helen sat and looked at him with her needle in her hand. From her position she saw his head in front of the dark pyramid of a magnolia-tree” (234).  The fact that the heavy flowers are “so smooth and inarticulate” further suggests their connection to Terence, who in the very next chapter tells Rachel he wants to write a book about Silence, “the things people don’t say” (Harcourt 216; Oxford 249). Foreshadowing the purple triangle that represents Mrs. Ramsay in To the Lighthouse, the triangular shape of the tree suggests the stability of Terence at society’s apex, and sets up a subtle contrast between the white arboreal flowers associated with the male partner and the white aqueous flowers associated with Rachel in the poem he reads to her on what becomes her deathbed: the “twisted braids of lilies” that the nymph Sabrina twists into her “amber dropping hair” in Milton’s Comus (Harcourt 327, 39; Oxford 381, 384).

The next few appearances of magnolias in Woolf’s life and writings are much less portentous. The leasing of Hogarth House in March of 1915, right after The Voyage Out was published, meant that Kew Gardens was only a mile away, and, once Woolf had recovered from the anxieties of the debut of her novel, the short (for Woolf) walk down the hill, past the train station, down Kew Road to the Lion Gate was a frequent outing. In April of 1918 and 1919, Woolf’s diaries mention viewing the magnolias at Kew. In 1918, the trees had been ravaged by a cold snap and several days of winds so harsh that they curtailed Virginia and Leonard’s walks (D1 141), and so at Kew, “the magnolias were a most melancholy sight; the great pinkish buds just ready to burst into the most magnificent of flowers, & now browned & shrivelled never to open (D1 142). The next April, however, the magnolias were in full flower. Woolf recorded a visit on April 12 --“we have been to Kew, & seen the Magnolia trees in blossom” (D1 263)-- the display being so impressive that they went again the next day, despite the rain, taking “the Minister for Education himself,” H.A.L Fisher (D1 263).  Over twenty years later, in late April of 1940, this moment of watching Fisher look at the magnolias “rather as a man who collects objects for the good of his soul” (D1 264) is one of the memories Woolf recalls in constructing her “platform of time” while writing “A Sketch of the Past” (D5 281).

Visits to the magnolias at Kew continue throughout Woolf’s life and fictional works, even after she and Leonard move from Hogarth House in Richmond to Tavistock Square in Bloomsbury in March of 1924. In the 1925 short story “Happiness” Stuart Elton recalls, and shares (though sharing any of his thoughts with others feels like feeding bits of himself to a pack of rapacious wolves) the memory of a solitary visit to Kew: “to the magnolia tree, to the lake to the river” when he felt a sense of “mastery,” the “terrific exaltation” of happiness, of being free in a lovely place “full of flowers -- magnolias, azaleas” (CSF 179, 180).  Ten years later, in April of 1935, Woolf and her husband again went to Kew to see the spring blossoms: “We went to Kew yesterday and if vegetable notes are needed this is to signify that yesterday was the prime day for cherry blossom, pear trees and magnolia” (D4 295).  And two years later, in the 1910 section of The Years, Eleanor, bored with sitting through yet another repetitive committee meeting, imagines a visit to Kew as an episode of freedom rather like that enjoyed by Stuart Elton: “she had wanted to go to Kew, [her other self] walked down a green glade and stopped in front of a flowering tree. Is it a magnolia? she asked herself, or are they already over?” (167).  Her fantasy of escape is physically manifested by her doodling of flower-like forms, rays emanating from a hole dug into her blotting paper, a geometrical figure echoed by the vision of the flowering trees: “Magnolias, she remembered, have no leaves, but masses of white blossom” (167).

Magnolias also appear outside of Kew in Woof’s work and experience, often as solitary showpieces in private gardens that recall a gentler, more refined past. Just as Woolf was admiring the magnolias at Kew, she included one in the garden of the old family house that Katherine remembers in Night and Day: “The house in Russell Square, for example, with its noble rooms, and the magnolia-tree in the garden, and the sweet-voiced piano,  and the sound of feet coming down the corridors, and other properties of size and romance—had they any existence?” (103). In her 1926 essay introducing the photographs of her aunt, Julia Margaret Cameron, she quotes a letter from her aunt to Tennyson which extolls the ancient beauty of the flower  --‘’ that consummate flower the Magnolia-- a flower which is, I think, so mysterious in its beauty as if it were the only thing left unsoiled and unspoiled from the garden of Eden” and reveals that there was a magnolia tree in the garden of that storied family’s home as well: “We had a standard Magnolia tree in our garden at Sheen, and on a still summer night the moon would beam down upon those ripe rich vases, and they used to send forth a scent which made the soul faint with a sense of the luxury of the world of flowers” (E4 380).  Magnolias inevitably appear in the catalogue of flowers planted by Orlando on her country estate: “snowdrops, crocuses, hyacinths, magnolias, roses, lilies, asters, the dahlia in all its varieties” (81). In April of 1931, Woolf notices a magnolia blooming in a French town: “Came to Alençon. A white elegant old town, with a great magnolia tree all stuck thick with flowers” (D4 19).

Woolf’s last magnolia carries on this trend of retrospective association. Describing Roger Fry’s depression and sense of isolation during the war years, Woolf comments, “He half thought of taking an old house with a magnolia tree in the garden and of retiring to Dulwich for life” (208), a somewhat backhanded affirmation of the magnolia as a suburban sigil.

[1]  See this article on Magnolias at Kew for helpful information on magnolias as well as a dazzling set of pictures of the wide variety of magnolias cultivated at Kew Gardens:  https://sequinsandcherryblossom.com/2015/04/15/just-for-a-change-magnolias-at-kew-gardens/

[2] In his history of Kew Gardens, Ray Desmond tells of a French visitor who commented on the heavy perfume of the Magnolia grandiflora during a visit in 1777 (93).

[3] My research in several books on Kew as well as of a number of historical maps reveals that magnolias were particularly grouped on the long path leading from the Lion Gate (Woolf’s usual entrance), past the Marianne North House, northeast towards the main, Victoria, Gate and the Palm House.  See this 1919 map: https://www.alamy.com/stock-photo-royal-botanic-gardens-kew-vintage-map-plan-london-1919-110483766.html Unfortunately, on my several trips to Kew I never thought to map the actual magnolias myself.