Another member of the buttercup family Ranunculaceae, clematis are mostly climbing vines -- the name comes from the Greek word for tendril or vine branch (Ward 85) -- with showy flowers, often purple or pink, having an elaborate central burst of stamens that usually turn into fluffy, hairy seedheads.

Clematis appears under many different names in Woolf’s writing, but these fall into a clear chronological pattern, beginning with the intensely deep purple Jackmanni variety which grow up to twenty feet high and have four petals or sepals with cream-colored centers.  The most famous variety in Woolf’s work, these grew at Talland House in Cornwall where the Stephen family spent their summers until Julia’s death in 1895 when Virginia was thirteen. She records their presence in her early memoir “22 Hyde Park Gate” and repeats the reference in her autobiography “A Sketch of the Past” (1939), both times in reference  to the engagement of Leo Maxse  and Kitty Lushington.  In the early essay, she comments, “Their engagement under the jackmanii in the Love Corner at St Ives was my first introduction to the passion of love “ (MOB 165). In the second, she includes the flowering vine in an inventory of the garden:”it had so many corners and lawns that each was named: the coffee garden; the fountain; the cricket ground ; the love corner, under the greenhouse; jackmanii grew there; on the seat under the jackmanii, Leo Maxse became engaged to Kitty Lushington” (MOB 128).  According to the 1887 Ordinance Survey of Talland House, the greenhouses lined a wall to the right side of the main house, extending down to the road. If you look at the map, you can see there is a distinct corner at the beginning of the cross-hatched greenhouses where a bench would create a convenient bower. 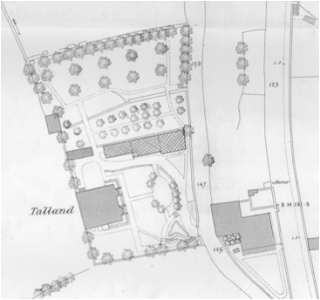 Despite its association with a first awareness of love, the fame of the jackmanni in Woolf studies is due mainly to their reappearance, though somewhat relocated and misspelled differently, in To the Lighthouse where Lily Briscoe attempts to paint Mrs. Ramsey sitting on the steps in the open French-door windows: “The jacmanna was bright violet; the wall staring white. She would not have considered it honest to tamper with the bright violet and the staring white, since she saw them like that” (TTL 22).  Here Woolf seems to tamper with the location of the flowers; in “A Sketch of the Past” it is PASSION FLOWERS rather than clematis that actually grew up the walls of Talland house to embower Julia Stephen’s balcony (above the French doors on the left) . Since Mrs. Ramsey is eventually portrayed as a purple triangle (TTL 55), the addition of the vivid clematis to the wall intensifies the connection between the woman and the flowers. Contemporary photos of the balcony at Talland House available on-line from the Smith College Library are not clear enough to identify the vine. 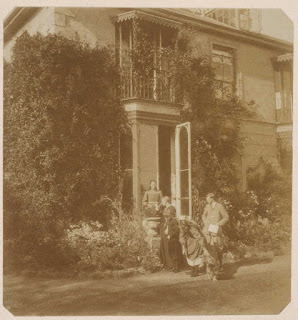 Clematis are associated with another embowered woman in Woolf’s earlier novel, Night and Day (1919), where Katherine, fascinated by mathematics and astronomy, leaves a family party in the country to go out and look at the night sky. Standing in a pergola, she finds her view blocked by tangled vines:“Thus a spray of clematis would completely obscure Cassiopeia, or blot out with its black pattern myriads of miles of the Milky Way” (ND 193). So she strolls down the gravel path to a bench that offers a clearer view of the stars.According to Greenaway, the meaning of clematis in the language of flowers is “Mental beauty” (12), particularly appropriate for Katherine who is always seeking the clarity of solitude.  Since Katherine’s star-gazing takes place during the Christmas season (ND 196), long past the bloom time of any flowering vine, the, “spray of clematis” must be fairly dense and tangled to “completely obscure” Cassiopeia. A likely candidate is C. vitalba, the only clematis native to Britain, a woody shrub, growing to twenty meters with dozens of small white spiky flower clusters, so prolific it can be found on many internet lists of invasive species and so destructive is completely banned in New Zealand. Its common names include “Virgin’s Bower” as well as “Traveller’s Joy” and “Old Man’s Beard” (Ward 85). The first two names refer to its habit of blanketing, even smothering bushes and hedgerows; “Old Man’s Beard” is applied to any clematis whose autumn seedpods produce a tangle of soft white hairs dense enough to resemble a beard.


In the 1929 short story “The Lady in the Looking Glass,” the clematis “traveller’s joy” is again associated with a feminine character, this time a spinster named Isabella Tyson, aged fifty-five or sixty. One of Woolf’s unknowable mystery characters, she ventures down into the garden in high summer “to pick something light and fantastic and leafy and trailing, travellers' joy, or one of those elegant sprays of convolvulus [morning glory] that twine round ugly walls and burst here and there into white and violet blossoms” (CSF 222). As in To the Lighthouse, the clematis is associated with bright white and violet, but here the narrator questions the easy comparison between woman and flower: “Such comparisons are worse than idle and superficial--they are cruel even, for they come like the convolvulus itself trembling between one's eyes and the truth”(222).  As in Night and Day, the tangle of the clematis and morning glory becomes a barrier to seeing clearly.  Later, when Isabella snips the “spray of traveller’s joy,” the narrator again undercuts the metaphorical identity between flower and female.  Although she imagines a series of scenarios that the flower’s fall will suggest to Isabella -- “tenderness and regret” for life, ‘how she must die herself and all the futility and evanescence of things ” (CSF 224) -- eventually the narrator strips her of all the frilly, fragile details of her life, “all that one had called the creeper and convolvulus” to reveal the hard naked wall of the woman herself (CSF 225).

Eight years later, in The Years, Woolf again introduces travellers’ joy; this time the emphasis seems to be on its whiteness as well as its profuseness.[1]  Eleanor is travelling back to visit her brother’s mother-in-law’s house after a trip to Spain: “The road was laid with soft white dust; the hedges, hung with wreaths of travellers' joy, seemed also thick with dust. The old horse settled down into his mechanical jog-trot, and Eleanor lay back under her white umbrella” (TY 185) Here the clematis seems almost suffocating.  Eleanor’s father has just died, and the clematis weaves itself into appropriately funereal wreathes. Eleanor herself is at loose ends; wondering what to do with herself she rejects the idea of moving to the country for fear she will become like Isabella Tyson, “a grey-haired lady cutting flowers with a pair of scissors and tapping at cottage doors” (TY 185).  The same year, in a short story called “Portraits,” a comment on the prevalence of motor cars in the country lanes also invokes the suffocating prevalence of the hedgerow invader: “so desperate the young are nowadays, driving in their racing cars to revolution. I can assure you the Traveller’s Joy in Surrey smells of petrol” (CSF 245).


Woolf’s last references to clematis occur in her final novel, Between the Acts, where it appears under the sobriquet of “Old Man’s Beard,” a mere slip plucked from the hedge by Isa, woman whose relationship with her husband is strained by mutual jealousies, aversions, and adulterous attractions. In a move to publically ignore her attractive but irritatingly “muscular, hirsute, virile” spouse (73), she invites the much less manly William Dodge to explore the greenhouse.  Along the path she picks “a leaf here and there from the hedge,” but, reciting fragments of poetry about plucking a “bitter herb by the ruined wall” and pressing “its sour, long grey leaf. . . twixt thumb and finger,” she throws the “shred” of Old Man’s Beard away (77). Later, after the play is over, she searches for the man she has been fantasizing about and, realizing she is never going to connect with him, she strips the “the bitter leaf that grew. . .outside the nursery window. Old Man’s Beard” (BTA 141).

In her scholarly annotations to a new edition of Between the Acts, Melba Cuddy-Keane makes a good case that Woolf has mistaken the name “Old Man’s Beard” and has confused the clematis with southernwood, an aromatic herb, also known as “Old Man” or “Lad’s Love” (BTA 183). Certainly, this use of clematis does not evoke many of the associations of the plant’s other appearances in Woolf.  The novel takes place in the middle of summer, when clematis would have been in its blooming stage, rather than its dried seed pod stage. It does seem to grow in a hedge, but it is not presented as flowering, much less as tangled or blanketing. Having a sweet, almond-like scent, C. vitabla is anything but sour or bitter.  The leaves of this clematis remain green until they turn brown and drop; southernwood, a variety of Artemisia, has grey-green, feathery leaves. Why then, did Woolf use the name for clematis when she was describing something quite different?  The answer is pretty obvious.  The two times it is used in the novel, it is at moments when Isa is asserting her autonomy, separating herself from men.  “Old Man’s Beard” thus becomes a convenient metaphor for patriarchy, even in the pleasant guise of romantic fantasy.

Beginning in a childhood memory of purple romance, the varieties of clematis become a tangled barrier to sight, a patriarchal white tangle that blocks the sky much like Milton’s bogey In A Room of One’s Own (AROOO 39).
[1] Interestingly, Leonard records buying clematis for the garden at Monk’s House in 1928, 1935, and twice in 1938, spanning the years they appear in Woolf’s later fiction (Garden Account Book)