Pampas grass, Cortaderia selloana, is a spectacular ornamental grass from South America, which grows up to thirteen feet tall in dense clumps or tussocks of flat, sharp-edged leaves with “arching plumes” of tiny pale flowers up to three feet long on the female plants (Hogan 418).  Generally frost-resistant, the tall grass blooms through the summer and autumn, with the dried plumes lasting into the winter. According to a historical website for the town of Goleta in Southern California, near Santa Barbara, the plant was initially introduced to North America “by sailors of clipper ships during the gold rush,” but became a local cottage industry in 1872 when one Joseph Sexton began commercial growth of the white-plumed variety and sent some plumes off the New York City, from whence they were shipped to England where they became a fashionable Victorian accessory.[i]

Being such a recent introduction, pampas grass has accrued very few mythological or literary associations.  In “The Death of Autumn,” published in her 1921 volume, Second April, Edna St. Vincent Millay describes

feathered pampas-grass [that] rides into the wind
Like agèd warriors westward, tragic, thinned
Of half their tribe.

In the sixties and seventies, pampas grass acquired some bohemian associations.  The Gardinista website remarks that in the UK “Some homeowners have stopped planting it in their front gardens because its presence has become associated suburban sex scandals” – apparently planting pampas grass was rumored to suggest that you were a “swinger.” [ii]

For Virginia Woolf, pampas grass carries both exotic and domestic connotations. Her ten mentions of the flowering grass are bracketed by four references to the actual South American region of its origins, but many of her references carry nostalgic overtones of childhood memories, often of Cornwall. The pampa or pampas of South America appear first in her 1918 review of W. H. Hudson’s autobiographical account of the “daily ecstasy of living out of doors” that marked his childhood in the great plains of Argentina (E2 299) and of the nomadic ne’er-do-wells who made up his “supply of tutors” (E2 300).

The grass from the pampas is similarly associated with childhood freedom. We know from Woolf’s autobiographical “Sketch of a Past” that pampas grass grew at Talland House, the family’s summer retreat in Cornwall; it marked a “grassy mound” called “the lookout place, between the clumps of pampas grass” from which the children often watched for the train signal which meant that visitors were arriving (MOB 129).  There are several more or less nostalgic appearances of pampas grass in her early fiction which recall this Cornish venue.  In Jacob’s Room, the Durrant’s house in Cornwall has several features in common with Talland House, including rooks and moths which rise and fall through the summer evening, passionflowers, and “a silvery meadow” at the end of which “The pampas grass raised its feathery spears from mounds of green” and ”A breadth of water gleamed” (JR 56). In Mrs Dalloway, the spears of pampas grass carry an intense metaphorical charge. When Peter Walsh breaks down in tears confessing his love for Daisy to Clarissa Dalloway, she leans forward and kisses him “before she could down the brandishing of silver flashing—plumes like pampas grass in a tropic gale in her breast” (45), an emotional reaction which reminds her of the “gaiety [which] would have been mine all day” if she had married Peter (MD 46).  Lady Bruton’s memories of her childhood in Devonshire are similarly animated: “And there were the dogs; there were the rats; there were her father and mother on the lawn under the trees, with the tea-things out, and the beds of dahlias, the hollyhocks, the pampas grass; and they, little wretches, always up to some mischief!” (MD 109). Perhaps the most literal rendition of Woolf’s Cornwall memories is in To the Lighthouse where Mr. and Mrs Ramsey’s evening walk seems to invoke the exact geography of the lookout place: “So off they strolled down the garden in the usual direction, past the tennis lawn, past the pampas grass, to that break in the thick hedge, guarded by red hot pokers like brasiers of clear burning coal, between which the blue waters of the bay looked bluer than ever” (TTL 16).  Even in The Waves, pampas grass seems to retain its old aura of announcing visitors as Rhoda, sinking down “on the black plumes of sleep,” remembers: “I see the stretched flower-beds, and Mrs Constable runs from behind the corner of the pampas-grass to say my aunt has come to fetch me in a carriage” (TW 18).

In the 1930’s, Woolf’s friendship with the Argentinian editor and writer, Victoria O'Campo generated a renewed vision of the tall grasses on the South American plains. Writing in February of 1935, Woolf evokes a romantic panorama of perpetual rustling movement: “I imagine you hear the wind bending a million acres of pampas grass” (L5 372). Later, in October, the gift of a framed set of South American butterflies elicits a further imagination of pampas grass in an exotic scene[iii]: “How remote and sunk in time and space you seem, over there, in the vast – what d’you call them --those immense blue grey lands with the wild cattle and the pampas grass and the butterflies?” (L5 439)

However, when pampas grass appears in a novel for the last time in The Years (1937), it is reduced to a dried shadow of its exotic self.  When North visits Sara he notices that she seems “shabby” and her room “untidy”; the only object he notices, “the pampas grass in a pot in the corner,” seems to embody both these qualities (TY 296).  Later, when Maggie visits Sara’s “cheap lodging house room,” the list of objects she inventories is longer but still drably domestic: “the pampas grass in its terra-cotta pot; the green vase with the crinkled lip; and the mahogany chair” (TY 332).

A last mention of the pampas, near the end of “A Sketch of the Past” (1939), contrasts this image of pampas grass staid/ stayed in the past with a more active vision of the exotic winds of its place of origin.  Describing how all of her male relations were shot into the machine of patriarchy at age ten and “emerged at sixty a Head Master, an Admiral, a Cabinet Minister, or the Warden of a college,” she compares their staid conventionality to the freedom of the pampas: “It is as impossible to think of them as natural human beings as it is to think of a carthorse galloping wild maned and unshod over the pampas” (MOB 153), an image which echoes the “tropic gale” of repressed emotion briefly flashing in Clarissa Dalloway’s breast and confirms her previous associations of pampas grass with the kind of gaiety and lack of restraint typical of childhood.

[iii] There is a framed set of butterflies on the staircase at Monk’s House which may be the one sent by O’Campo. 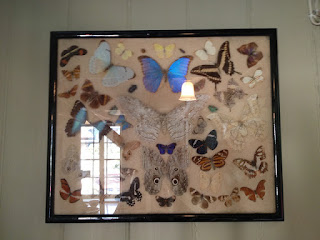