Nasturtiums belong to the genus Tropaeolum, from Greek tropaion, meaning trophy; apparently Linneaus thought that the climbing variety resembled a tree trunk on which the trophy shields of defeated enemies were hung, the large circular leaves looking like shields and the spurred flowers like helmets (Hogan 1434 and Ward 272). Perhaps because of these visual military metaphors, in the Victorian language of flowers, nasturtiums are associated with “Patriotism” (Greenaway 30). There are over eighty species of nasturtium, both perennials and annuals, all originating in Central and South America; they include both climbers and “scramblers,” all composed of masses of tangled stems and bearing five-petalled flowers with a distinctive hood and spur on the back, originally in a range of colors from yellow to orange and red (Hogan 1434).  The first dwarf variety arrived in England in 1570, and the larger T. majus, the progenitor of most contemporary species, was described as early as 1629 (Ward 274).

As Edith Hollinsworth points out in her collection of lore, Flower Chronicles, nasturtiums were initially associated with food and more likely to be found in the kitchen rather than the flower garden (223). They were, for instance, favored flowers of the English diarist, John Evelyn, who thought eating them could cure scurvy and wrote about them in his Acetaria: A Discourse of Sallets (1699) (according to Wikipedia, “the first recorded book on salads”), providing a recipe for an “Intinctus” of oil and vinegar, mustard and coarse ground pepper than sounds very contemporary (Hollingsworth 220-1) and recommending preserving the candied buds for eating in winter as a kind of poor man’s caper (Ward 273). In fact the common name, “nasturtium” comes from nasus torquere, “to twitch the nose,” and refers to its peppery aroma (Ward 272).

As is sometimes the case with other plants, Woolf’s references to nasturtiums have little relation to the flower’s botanical or cultural history. The six appearances of the flower -- four in fiction and two in diaries and letters -- focus on its vivid color, particularly in contrast to other blooms. Nasturtiums first appear in a diary entry of September 1921 celebrating the cottage garden at Monk’s House in a typical collage of contrasting tints: “Our garden is a perfect variegated chinz: asters, plumasters, zinnias, geums, nasturtiums & so on: all bright cut from coloured paper” (D2 138).  Asters are usually purple; zinnas are known for their intense magenta and orange blossoms; and geums are typically a vibrant red-orange, a shade darker than orange nasturtiums.[1] In her book on the garden at Monk’s House, Caroline Zoob comments on Leonard’s love of orange flowers (90), and how the prevalence of the combination of burnt orange and “soft lilac blue” in Vanessa Bell’s paintings inspired contemporary plantings at Monk’s (62).  The purple and orange pairing continues in Jacob’s Room, published almost exactly a year later, in October of 1922, in the evocation of a twilight garden in Cornwall: “Already the convolvulus moth was spinning over the flowers. Orange and purple, nasturtium and cherry pie, were washed into the twilight, but the tobacco plant and the passion flower, over which the great moth spun, were white as china” (56). “Cherry pie” is a common name for heliotrope (See my entry on CHERRY PIE). 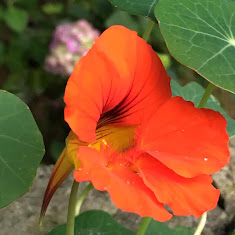 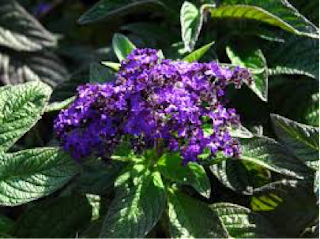 Nasturtiums continued to be a staple of the garden at Monk’s House. In April of 1931, Woolf wrote to Ethel Smyth, describing the “absurd and irrational happiness” of her life in the country with Leonard, recounting how “we giggle and joke, and go and poke at roots and plan beds of nasturtium” (L4 303).

In 1933, again emphasizing the bright color of the flowers, Woolf places nasturtiums in the British window box of Elizabeth Barrett Browning, in Flush, where their bright hues both imprison the invalid and mark the passage of the seasons: “The light, normally obscured by a curtain of green damask, was in summer further dimmed by the ivy, the scarlet runners, the convolvuluses and the nasturtiums which grew in the window-box” (19) The orange nasturtiums combine with green ivy, red-orange and green scarlet runner beans, and white convolvulus, creating a collage of the colors of the Italian flag which anticipates her eventual freedom in the south.  As she often does, Woolf includes a triplet of flower appearances in her composition. Winter arrives and the bright colors fade: “When the leaves of the scarlet runners and nasturtiums in the window-box yellowed and fell she drew her Indian shawl more closely round her” (F 33). The arrival of spring begins another growing season: “And the ivy that hung over Miss Barrett’s bedroom window flourished; its green curtain became thicker and thicker. And in summer the nasturtiums and the scarlet runners rioted together in the window-box” (F 50). Bright harbingers of warmth, nasturtiums are a highlight of even the smallest garden.

[1] I have been unable to find any flower named “plumaster” either on-line or in my fairly copious collection of garden books. It could be a misspelling of “plumbago,” a shrub which is known for providing a true blue accent in the summer garden, or a nickname for a particularly dark purple variety of aster.