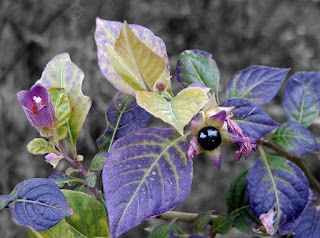 Any discussion of nightshade must begin by sorting out the various kinds, all of which are “deadly” in the sense of being highly poisonous.  “Purple nightshade” or Solanum xanti belongs, along with tomatoes and potatoes, to the Solanaceae family. Native to California, it grows in partial shade, its vinous growth and small bluish purple flowers sometimes choking off the host plants on which it climbs.[1] 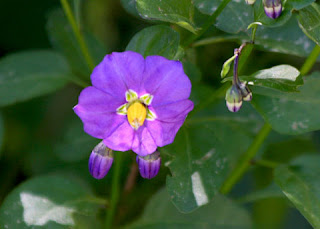 In her article on the “Sentimental Botany” of nightshades, Elizabeth Campbell discusses five varieties of Old World nightshade: belladonna or “deadly nightshade” (S. Atropa belladonna), bittersweet (S. dulcamara) aka “woody nightshade”, as well as henbane, mandrake, and datura, which are also poisonous members of the Solanaceae family.[2]

Woolf only mentions “nightshade” once in all her published works, in a summary of William Rodney’s  grandiloquent and somewhat jumbled talk on the Elizabethan use of poetic metaphor in Chapter Four of Night and Day: “Literature was a fresh garland of spring flowers, he said, in which yew-berries and the purple nightshade mingled with the various tints of the anemone; and somehow or other this garland encircled marble brows” (54).

The mixed metaphors of the rest of his disquisition seem at work in this passage, which, being at least partially derived from Keats’ Ode on Melancholy, is rather oxymoronic. For one thing, it is seasonally inaccurate; yew berries appear in winter and purple nightshade blooms in autumn.  In addition, the “fresh garland of spring flowers” is composed of plants known to be poisonous and commonly associated with loss and death.  The yew (Taxus baccata), is a common sight in British cemeteries, and all parts of the plant, especially the berries, are highly toxic; in the Victorian language of flowers it signifies “Sorrow” (Greenaway 46). Since Rodney is talking about Elizabethan flowers, it is hardly possible that he is referring specifically to the “purple nightshade” native to California; more likely this is a reference to either belladonna or bittersweet, both of which have purple flowers.  While anemones are only slightly toxic, they are also often purple and have a Victorian association with being “Forsaken” (Greenawy 8; also see my entry on Anemones in my Woolf Herbarium https://woolfherbarium.blogspot.com/p/anomone.html).

Keats, in fact, advises against the consumption of the first two flowers, pairing them with Wolf’s-bane or aconite (Monkshood), another flower known for its dangerous side-effects:

No, no, go not to Lethe, neither twist

Wolf's-bane, tight-rooted, for its poisonous wine;

Nor suffer thy pale forehead to be kiss'd

By nightshade, ruby grape of Proserpine;[3]

At any rate, it is clear that Woolf is employing nightshade’s stereotypical literary associations with poison and death as part of her ironic revelation of Rodney’s pretentious confusion.

[1] Information gathered from website of the California Native Plant Society:   https://calscape.org/Solanum-xanti-()  Accessed May 28, 2021.