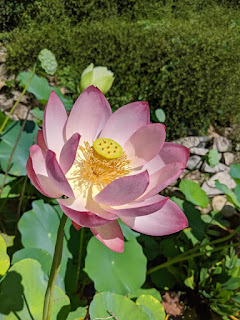 Historically, the true lotus -- Nelumbo nucifera  -- has often not been carefully distinguished from the water lily -- genus Nymphaea. In her book on The Mythology of Plants, Gieseke notes that both plants were associated with Egypt and were “regularly confused by classical authors who did not have firsthand knowledge of them” (125).  Herodotus called the lotus the “Egyptian waterlilily” (Folkard 217), and, indeed, to make things even more confusing, there is a species of white Egyptian waterlily named Nymphaea lotus (Hogan 937).

While the two plants are similar in that they grow in shallow water at the edge of lakes and marshes, have round leaves, and have a single blossom opening to a yellowish center, there are some crucial differences: lotus leaves and flowers are both “emergent,“ that is they rise up above pond level.[1] Hogan describes the “bluish green wavy-edged leaves” of lotus as being “borne umbrella-like on long stalks“ above the water (922). The lotus blossom too emerges several inches above the leaves and is marked by a very characteristic decorative seed pod. Nelumbro comes in a variety of pastel colors from white to pink to yellow and grows throughout Asia; of the three varieties of Egyptian “lotus”--the white lotus (Nymphaea lotus) the blue lotus (Nymphaea caerulea), and the pink lotus (Nelumbo nucifera) two are waterlilies.[2]

This taxonomical confusion is echoed in the religious and literary symbolism of the lotus. A learned article on the meaning of lotus symbolism in Buddhist art and philosophy traces its significance back to the Egyptian association of the lotus with the sun and thus with the idea of resurrection (Ward, William 135).  In Indian cosmology, the lotus assumes an even more sacred status, the golden lotus being seen as the source of Brahma, the creator of the world; in Buddhism the lotus flower, growing as it does out of the mud, becomes a symbol of purity (137).

This spiritual apotheosis is not, however, sustained in classical sources, where the most memorable appearance of a plant called “lotus” in is Book IX of Homer’s Odyssey, the encounter with the lotophagi whose consumption of the lotus fruit and flowers causes them to be lulled into a perpetual sleep of listless pleasure. There is widespread disagreement as to the exact plant Homer is referencing, the most frequent candidate being the jujube fruit, Zizphus lotus or Chinese Date Tree, produced by a small deciduous tree belonging to the buckthorn family (Giesecke 124; Hogan 1498 ). Other candidates include Nymphaea caerulea, the blue Egyptian water lily, which has been shown to have soporific qualities, or even the poppy, whose seed case somewhat resembles that of the true lotus.[3]

The blue or purple water lily also appears in Ovid. In yet another tale of escape from rape through metamorphosis, the nymph Lotis is transformed into the flower when pursued by Priapus, a lustful nature god. There is, however, an extra twist of horror in this tale, as the fate of the nymph is discovered by a young woman, Dryope, who plucks one of the purple flowers for her child to play with, only to realize the stalk is bleeding.  For her innocent mistake, she too is transformed and merged into what is confusingly referred to as a “lotus tree” (Ovid, book 9, ll. 350 ff.; Humphries 220-1).

A more contemporary version of a lotus story, and one which Woolf might very well have known, is Hans Christian Anderson’s “The Marsh King’s Daughter,” in which an Egyptian princess goes in search of a flower to save her dying father and, in a version of the Persephone myth, is captured by the Marsh King. [4]  She gives birth to a daughter, who rises out of the marsh in a lotus flower and with the help of two storks and a Christian priest is finally saved from her ugly frog enchantment and restored to her mother and grandfather, she herself being the flower he needed to be restored to health. While the Christian intervention is a later addition, this version preserves the Egyptian and Indian associations of the sacred lotus with curative resurrection.

Virginia Woolf’s five references to the lotus -- two in review essays and three in letters and diary entries -- preserve its exotic provenance with only a hint of its deeper connotations. Woolf’s first mention of lotus comes in a 1919 review of novel by Joseph Hergesheimer called Java Head about a New England trading family where she quotes a long passage describing the clothing and accessories worn by a Chinese woman as an example of the author’s self-indulgent but “loving and precise” painting of “little tufts and sprigs”: “Her hair rose from the back in a smooth burnished loop. There were long pins of pink jade carved into blossoms, a quivering decoration of paper-thin gold leaves with moonstones in glistening drops, and a band of coral lotus buds” (E3 48).


In two diary entries of 1924, the lotus again appears as an exotic decorative accessory.  In a July account of a visit to Knole to lunch with Vita Sackville-West’s father, Woolf details the chaotic plenitude of Knole -- “You perambulate miles of galleries; skip endless treasures—chairs that Shakespeare might have sat on—tapestries, pictures, floors made of the halves of oaks” -- surrounding the “solitary peer” who sits “lunching by himself in the centre, with his napkin folded into the shape of a lotus flower,” conjuring the image of some far-Eastern potentate, serenely encircled by his plunder (D2 306). A few months later, at tea with Mary Hutchinson in a room by the Thames with “the red-lighted tugs” going past, Woolf again sights an ornamental lotus, this time a necklace: “Mary in black with lotus leaves around her neck” (D2 320). Ten years later, in a June 1934 letter to her exuberant friend Ethel Smyth, Woolf imagines a charmingly exotic tropical scene in which the lotus is associated with alligators in an excessively hot clime: “I lie like an alligator basking. Only alligators bethink them of the lotus and the loves of other alligators in this weather; while I think, on the contrary, of slabs of green ice, and green eyed bears, and white birds”(L5 310).

While there may be a trace of Homer’s passive lotus eaters in these imaginary, lolling reptiles, only the last of Woolf’s references, another quotation from a book being reviewed, carries any weight of possible meaning beyond the mere evocation of the exotic.  In “The Captain’s Death Bed,” Woolf’s 1935 response to the biography of another sea-farer, Frederick Marryat, she quotes a passage from one of Marryat’s novels, Jacob Faithful, in which the young hero, laid to bed with a nearly fatal fever, wakes up to hear the prayer of his old schoolmaster: “Earth, lay light upon the lighter-boy—the lotus, the water-lily, that hath been cast on shore to die”
(E6 69).  While extending the confusion between the lotus and the waterlily, these words of Marryat conjure the aura of the sacred lotus, symbol of curative resurrection.

[4] The story is contained in volume II of the Stories of Hans Christian Anderson translated by H. Oscar Sommer with 100 Pictures by Arthur J. Gaskin (1896), listed as part of the Woolf library in King and Miletic-Vejovic.  We know Woolf was working on translating Anderson from the German in February of 1897 (PA 37, 38).