Flags
Flags is the common name given to a species of water-loving yellow irises, Iris pseudacorus, growing as much as five to six feet high. Their long long, sword-like, grey green leaves have led them to be known locally in England as “segg” or “sword grass.”[1]  Blooming between May and August, the bright flowers are to be found in waterways, ponds, and marshes throughout England and the continent.

Thought to be the origin of the fleur-de-lis, the flower has numerous heraldic associations with knighthood, royalty, purity, and the church.[2] Octavius Ceaser uses it in Shakespeare’s Antony and Cleopatra where he compares his own failing fortunes in the eyes of the public to that of a flower shifting in the varying currents of a streambed:
And the ebbed man, ne’er loved till ne’er worth love,
Comes deared by being lacked. This common body,
Like to a vagabond flag upon the stream,
Goes to and back, lackeying the varying tide
To rot itself with motion.  (Act I, Sc iv, ll. 43-7)

Woolf only mentions flags in one novel, Jacob’s Room.  Echoing Shakespeare, the reference is, however glancing, particularly significant as it is repeated three times, and serves as the cover image. The first full description of Jacob’s rooms in in Neville’s Court at Trinity College notes that among the usual student detritus of books, photographs, and invitations “There were yellow flags in a jar on the mantelpiece” (JR 37).  Shortly after listing the contents of his library, including the pressed POPPY leaves which foreshadow Jacob’s death in the fields of Flanders, the narrator summaries the atmosphere of Jacob’s deserted room: “Listless is the air in an empty room, just swelling the curtain; the flowers in the jar shift. One fibre in the wicker arm-chair creaks, though no one sits there” (JR 38).  This exact passage is repeated a few sentences from the end of the novel (JR 186), signaling the final and eternal absence of the “ebbed man, ne’er loved till ne’er worth love [who] Comes deared by being lacked.” The fact that the shifting flowers are the heraldic flags of chivalry associated with Octavius Ceaser in one of Woolf’s favorite plays is an added poignancy.  That this moment in which the flags wave is particularly central to the novel is suggested by the image of the vase on the mantelpiece with three flowers which graces the cover. 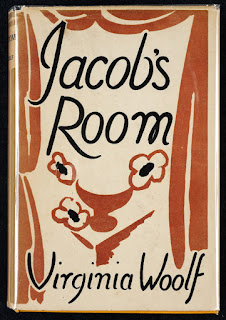 As for flags in Woolf’s own garden experiences, only once, in a June 1938 diary entry about travel in Scotland, does she mention seeing “Yellow flags and great foxgloves” covering hills empty of “farms villages or cottages” (D5 153). Although she never mentions flags growing at Monk’s house, Leonard’s fondness for ponds suggests they may have been tucked away at various margins. Two 1930’s photos of the rectangular Fish Pond, which was one of Leonard’s first improvements to Monk’s House, show some kind of water iris growing in the corners, and a contemporary shot of the same pool clearly displays the high yellow cups of pseudacorus (Zoob 68-9).  A view of the  garden in Spater and Parsons (Pl 140, p. 168) suggests that they were also planted in the Dew Pond.