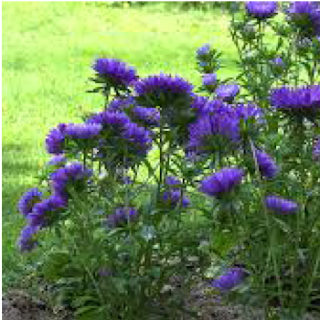 The name “aster” refers to as many as 250 different varieties of star-shaped flowers that belong to the same genus as the daisy, similarly composed of many slender petals, mostly pink, blue, or lavender in color, often with yellow centers.  With many blossoms on each stem, they can stand up to two feet tall, but also are prone to “sprawl under the weight of their foliage and flowers” (Hogan 199). Mentions of asters in Woolf’s work cluster around the early 1920’s when they were featured in the garden at Monk’s House. Leonard recorded buying asters in 1937 inhis Garden Account Book.

Something of a bit player in Woolf’s bouquet of flowers, one important quality of asters seems to be whether they are upright or downtrodden. Woolf’s first reference to asters, in September of 1920, laments the effects of an autumn thunderstorm: “the rain rains so as to beat the asters to the ground” (D2 66).  A year later, however, they are part of the “perfectly variegated chintz” of flowers decorating the garden, “all bright cut from coloured paper, stiff, upstanding as flowers should be” (D2 138). Then, in a September 1922 letter to Barbara Baegnal, Woolf once again complains of how six days of wet have flattened the asters.  Saying she has her work “cut out for her,” she ends her missive sighing,“ I must go pick apples, or raise asters” (L2 558, 559).

Contemporaneous with her mentions of the flowers at Monk’s House, and one of the clearest direct synergies between life and work, the most significant use of asters in Woolf’s fiction occurs in her 1922 novel Jacob’s Room where a small purple aster appears three times in the first chapter.  At first it is just a simple flower next to child’s sand bucket, lit up on the lawn at night by a powerful lamp (8).  Then a wind comes “tearing across the coast,” causing the aster to “tremble violently” (10). Finally, as the rain pours down in the early morning, the aster is “beaten to the earth” (11).”  The pummeled aster, ground into the mud like the bodies of so many young men in WWI, predicts disaster; a foreshadowing of what Zwerdling calls “the preparation of canon fodder” (65), it is another version of the crab trapped in the nearby bucket, circling the bottom but unable to climb out, which is often taken as mark of Jacob’s eventual lack of control over his own life. One wonders if Woolf had read William Cullen Bryant’s “My Autumn Walk” (1864) where, anticipating the Civil War, the walker notices that “the purple aster waves/ In a breeze from the land of battles/ A breath from the land of graves” (qtd by Ward, 56).

Originally an anemone in a vase picked by his mother, the purple aster was inserted into the novel after the completion of the holograph draft (Bishop 5), the first in a sequence of spiky and/or purple plants -- LILACS, WILD ORCHIDS, THISTLES, TEASLES, PANSIES, CHESTNUT BLOSSOMS, VIOLETS, HELIOTROPE, PASSION FLOWER, IRIS, HEATHER BELLS -- which populate the novel, a host of floral reminders of lost youth in the tradition of the pastoral elegy embodied by “Adonias,” Shelley’s lament for the early death of Keats, which Jacob ironically loans to Florinda (JR 80-1).

The rather anomalous appearance of “red asters” in the memory of the old women singing of her love across from the Regent’s Park Tube station in Mrs. Dalloway follows this elegiac pattern. A feature of the old woman’s memory from the holograph manuscript on (see Wussow (96-8), the flaming red asters are all she can remember of her “lover who had been dead these centuries,” gone when “death’s enormous sickle had swept those tremendous hills” (MD 79).

The only other appearance of the starry flowers in Woolf’s fictional prose is in the 1929 short story “The Lady in the Looking Glass,” where the emphasis returns to the flowers’ floral posture.  The elderly lady’s mysterious character is evoked by a contrast between several flowers: is she more like the “tremulous convulvous,” (the twining morning glory) and the “leafy and trailing trailing traveller’s joy (a kind of clematis) rather than the “upright aster, the starched zinnia, or her own burning roses alight like lamps on the straight posts of their rose trees”? (CSF 222) Another example of the uselessness of thinking we can actually know the souls of others, the story does not choose. When the bright reflection from the mirror pours over her like the lantern illuminating the flower in the grass, there is nothing to see.

The meaning of aster in the Victorian language of flowers is “afterthought” (Greenaway 8). In all these fictional incidences, the aster stands or collapses to remind us to think after the ones who are gone.