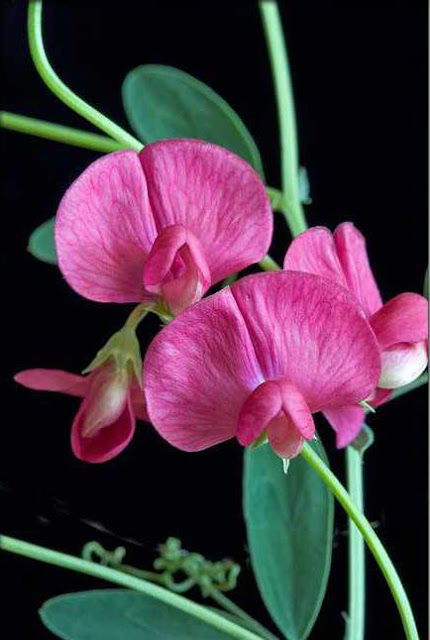 Sweet peas, Lathyrus odoratus, belong to a genus of pea-flowers (Lathyrus) in the sub-family of Fabacea (peas), including the smaller wild, magenta perennial Lathyrus latifolius.  Annual climbers with pairs of blue-green leaflets, multiple spiraling tendrils, and delicate flowers in a mostly pastel range of colors, as their name implies, they are highly scented with a sweet odor often compared to honey and/or oranges (Hogan 798). Somewhat resembling small orchids or irises in their structure, the actual blossoms are composed of five elements: two upright standards, a keel or central folded petal, and two lower wing petals which protectively flank the keel. Originally purple or rose, the sweet pea rose to popularity in the Victorian period as gardeners bred ever more colorful, larger ornamental varieties.[1]

According to D.B Crane’s 1910 treatise, The Book of the Sweet Pea, the flower was first introduced into England from Sicily in 1699 by a Sicilian monk, Father Francisco Cupani, who sent seeds to a gardening friend in Middlesex (10). By 1730, the first cultivar, a pink and white blossom named Painted Lady, was available for sale (13).[2]

Development was fairly random through the 1840’s and beyond until Henry Eckford began introducing a series of named varieties of “grandiflora” sweet peas in 1882 (Crane 3). A more recent version of sweet pea history by Graham Rice, notes that by 1900, Eckford had introduced 115 new varieties with “improved form, larger size and new colours yet retaining the fragrance which was such a striking feature of the original wild species” (7).  The next major development came in 1901 when Mr. Silas Cole, head gardener at Althorp Park, hereditary home of the Earl of Spencer, began breeding the so-called “Spencer” varieties, about 25% larger with very waved, frilly standards (Rice 9, Crane 4); he exhibited his first new flower, “Countess Spencer” at the first annual meeting of the National Sweet Pea Society (Rice 9).  Further variations by the Unwins with striped edges and flakes of color were “all the rage in the twenties and thirties,” according to Sarah Raven’s useful account of the most popular current varieties.[3]

Sweet peas were thus an Edwardian success story. A website called “SymbolSage” declares that sweet peas became a “floral sensation” during the Victorian and Edwardian eras.[4]  Another website on the Harvesting History of the Sweet Peas affirms that “By 1910, the sweet pea was the most popular annual flower in cultivation,”[5] a claim bolstered by Crane who, in the 1909 Preface to his book, declared the sweet pea to be “the peer of hardy annuals” (v).

Despite their horticultural popularity, sweet peas appear to have a fairly low symbolic and literary profile.  In Greenaway’s 1884 language of flowers they are said to signify “delicate pleasures,” (39) an attribution similar to Anne Pratt’s earlier (1846) description of its tendrils, “that graceful spiral shoot by which the weak cling to the strong,” and “its delicate butterfly-shaped blossoms” (74, 76). The association of sweet peas with butterflies is characteristic of the only two poetical references I could find to sweet peas. In Keats’s early, somewhat mawkish but wildly floriferous lyric “I stood tip-toe upon a little hill” (published in his first volume of poetry in 1817), the fifth stanza is devoted to the flower:

Here are sweet peas, on tip-toe for a flight:
With wings of gentle flush o’er delicate white,
And taper fingers catching at all things,
To bind them all about with tiny rings.[6]

Like the speaker on the hilltop, the flowers are on tip-toe, poised for flight. Keats’s characterization of their color seems to refer to the early cultivar Painted Lady, and their tendrils are personified as ladies’ fingers trying to bind with rings; the passage parallels  Pratt’s description so closely as to suggest she might have had the Keats poem in mind.

The only other poetic reference to sweet peas I was able to find, the poem “A Child’s Vision”by Alfred Noyes, reiterates and makes explicit the connection between sweet peas and butterflies:

Under the sweet-peas I stood

And drew deep breaths, they smelt so good.

Then, with strange enchanted eyes,

I saw them change to butterflies.

Higher than the skylark sings

I saw their fluttering crimson wings

And fly into the upper air.[7]

Perhaps because the poem is about a child, Noyes drops any reference to the clinging tendrils.[8]

Interestingly enough there is a butterfly named “Painted Lady. ” I am not sure which came first, the butterfly or the flower; the butterfly is mentioned in the 1886 version of W.S. Coleman’s British Butterflies, which Virginia Woolf consulted as a child (Coleman 116). Woolf herself referred to this species of insect at least twice. In a diary entry of September 3, 1917 -- one of a series in which she carefully annotates her natural surroundings in Sussex as she is recovering from a major breakdown -- she records “Painted Lady seen near Glynde” (D1 4l).  The editors’ insertion of the scientific name of the species [Vanessa cardui] reveals a possible link between the butterfly and her older sister (though in Coleman the name is still Cynthia Cardui) (116).[9] In Chapter Two of Jacob’sRoom, painted ladies appear with a host of relatives in a butterfly catalogue including clouded yellows, fritillaries, blues, commas, and a white admiral, as well as peacocks with whom they feast on carrion dropped by a hawk (JR 22).

Woolf’s ten mentions of sweets peas are evenly divided between her fiction and her life-writing. All five fictional references occur in the space of three pages in Mrs. Dalloway where, featured in the floral catalogue enumerated in the early scene in Mulberry’s flower shop, the flowers are carefully activated in a progressive series of steps. Woolf begins with a triple invocation. First the flowers are simply listed in the initial roster: “There were flowers: delphiniums, sweet peas, bunches of lilac; and carnations, masses of carnations. There were roses; there were irises” (MD 12). Later in that same paragraph, they are more fully described: “all the sweet peas spreading in their bowls, tinged violet, snow white, pale.” And finally they are turned into a metaphor, the pale colors of the ruffled flowers being compared to dresses: “as if it were the evening and girls in muslin frocks came out to pick sweet peas and roses after the superb summer’s day” (MD 13). As if enlivened by the metaphor, the flowers then break out of the display. First we see the florist Miss Pym reacting to the sound of the car backfiring in Bond St., standing at the window “apologetically with her hands full of sweet peas” (MD 13); then Clarissa moves to join her, also laden with an even larger burden of flowers: “coming to the window with her arms full of sweet peas, [she] looked out with her little pink face pursed in enquiry” (MD 14).[10]  Connecting the sweet peas with Victorian/ Edwardian memories of young girls in the twilight, this appearance emphasizes the pleasure of their old-fashioned delicacy, Clarissa’s pink face seeming to be surrounded by the pale pastel colors of the flowers.  The central vision of this sequence -- the scene of the garden at twilight -- is similar to many Cornish memories of butterflies and moths hovering over evening primroses, one of which is evoked at the end of this paragraph in Mrs. Dalloway,[11] linking sweet peas in an intricate complex of image and allusions: to painted ladies, and thus to memories of young girls and of butterflies hovering over gardens at twilight.

The five mentions of sweet peas in Woolf’s diaries and letters are clustered chronologically around the time of their appearance in Mrs. Dalloway. All are set in the garden at Monk’s House where the flowers were apparently a regular feature, and most reflect moments of pleasant escape associated with the somewhat old-fashioned domestic chore of flower arranging. In her dairy of August 1920, after recounting her labors painting the earth closet, Woolf records taking a break from her reading: “Now to pick sweet peas” (D2 57). A week later, complaining about a visit from Lady Nelly Cecil--“ I dont like these civic interruptions into rural life” -- Woolf confides that her preparations for the visit from this member of the aristocracy consisted only “in pinning a chair cover together & filling the vases with sweet peas & roses” (D2 57). The plants were still growing at Monk’s House eight years later in September 1928, when Woolf records a brief spat and reconciliation with her husband: “Leonard gave me the blue glass jug today, because he was cross when I slapped his nose with sweet peas, & because I was nice to his mother; & when I went into luncheon I saw it on the table. Indeed, I almost cried. He went to Brighton to get it for me” (D3 194).  Woolf returns to the decorative exercise of arranging sweet peas in a letter to Ethel Smyth in at the end of July 1931. Recounting her relief after her husband had finished reading the typescript of The Waves, she celebrates her leisure noting that “now I can spend a whole hour putting sweet peas in water and needn’t hurry down to my commas and semi-colons in a state of torpor, distrust, and somnolent sordidity” (L4 357).  During the hot August of 1933, Woolf again writes to Symth about the sweet peas in the garden at Monk’s House, this time bemoaning the loss of their delicate pleasure: “The heat—oh the heat! — The meadow is like a yellow blanket, burnt up; all the sweet peas dead” (L5 211).

[1] The sweet pea’s ability to self-pollinate led to its being used by Gregor Mendel in his ground-breaking genetic experiments. See  https://symbolsage.com/sweet-peas-flower-meaning/ Accessed March 22, 2022.

[2] The Painted Lady Variety is still for sale. See  https://www.plant-world-seeds.com/store/view_seed_item/1272?currency=USD&gclid=CjwKCAjwxZqSBhAHEiwASr9n9ImWsdwcE_892LjHnB4IbxpakXK0hWZVjRbXQHExZvYZvFw2avDpsRoCFg4QAvD_BwE

[7] For complete text of the poem see: https://indianapublicmedia.org/focusonflowers/childs-vision.php Accessed April 2, 2022. I was unable to find the date that this poem was published.

[8] Although Woolf knew of Noyes’s poetry, she apparently didn’t have a particularly high opinion of his work.  In February of 1930 she wrote to Clive Bell (in the satiric tone she commonly used with her brother-in-law) of a party she had been excited to attend until she “discovered that it was to meet 500 Colonial dentists and to hear Mr [Alfred] Noyes read his own poetry aloud. Not a distinguished gathering” (L4 133).

[9] This just might be a clue to why the heroine of The Voyage Out was originally named Cynthia (see L1 343 where Woolf tells her sister that Cynthia won’t do as a name because it is borne by too many “Meredithian” young ladies). I can’t help, however, but make a tentative connection between the name Cynthia and the pervasive moth imagery in the novel analyzed by Christina Froula in “Out of the Chrysalis: Female Initiation and Female Authority in Virginia Woolf's The Voyage Out.”

[10] A perusal of the holograph manuscript of The Hours reveals that the flower shop scene was written and rewritten in Notebook Two (272-7).  The drafts show Woolf coming to the three-part invocation by the second draft, but the final personalization in the hands of the two women does not appear until the published version.