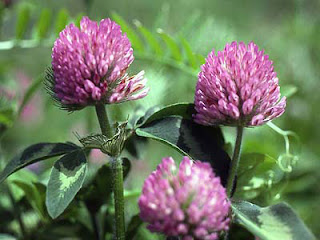 Red clover or Trifolium pretense, a member of the pea family, is the only variety of clover to appear in Woolf’s writing. Its old English name was “trefoil” because of its three leaves.  The leaves are most important in flower folklore, the name being derived from the Anglo-Saxon word for “club” and the shape being used on playing cards (Folkard 156). Four leaf-clovers are, of course, generally seen as a sign of good luck, and Folkard argues that “To dream of seeing a field of clover is of happy augury, indicating health, prosperity, and much happinesss” (157). The flower is a ball-shaped spike, composed of many small rolled-up petals.

Woolf never gets close enough to observe or record such detail as her clover invariably serves as a field of color in the background, the exception that proves the rule being a quotation from a poem by Muriel Stuart in a 1918 review of her work that quotes a line about “the purfled clover’s ears,” the wonderful word “purfled” meaning decorated on the border (E2 306).  In Woolf’s non-fictional prose, clover is part of the usually happy routine of rural life, often associated with butterflies. Her first mention of clover occurs in a 1916 essays about “Butterflies and Moths: Insects in September” where she revels in the spots where butterflies congregate, “a patch of clover or a sunny hollow among trees which seems to possess some irresistible charm for insects, some sweetness or stillness or echo” (E6 382).
Several times she celebrates the clover in Sussex.[1]  In her Asheham Diary of September 1917, consisting mainly of short notes about the weather, the garden, and the surrounding countryside, she notes the clover lying cut in the field opposite, and two days later, bicycling through a “Superb sunset,” she notices “Men working very late carting the clover” (D1 52). In 1920, there is another crepuscular encounter with clover, as Woolf walks up the lane to the cross-roads looking for a missing servant: “Then the clover smelt sweet up by the corner; & there was Lewes flashing, truthfully speaking with a kind of diamond brilliance, & the sky all powdered (?) with stars,
grey with them since the moon was not up” (D2 59).  Many years later, visiting Italy, another mention of clover is also redolent with a kind of appreciative peace: “Lake Trasimen: stood in a field of red purple clover: plover’s egg lake; grey olives, exquisite, subtle; sea cold, shell green” (D4 313).
The only negative mention of clover occurs in her 1932 essay on “The Novels of Thomas Hardy” in a list of particularly vivid (and painful) scenes including “the bloated sheep struggling among the clover” in Far from the Maddening Crowd (E5 564).

The mentions of clover in Woolf’s fiction echo many of her life experiences. In Jacob’s Room (1922) the half-awake hero remembers a butterfly hunt in a clover field:  “The pale clouded yellows had pelted over the moor; they had zigzagged across the purple clover” (22).  A few years later in Mrs. Dalloway, a sleepy Lady Bruton is compared to a similar field, drowsing “like a field of clover in the sunshine this hot June day, with the bees going round and about and the yellow butterflies” (MD 109). When Flush (1933) is growing old, he describes England to the Italian dogs evoking “the smell of clover and the smell of Oxford Street” (147).

However, later references to clover become increasingly fraught. An account of the countryside at the beginning of the 1914 section of The Years describes the “brilliant spring” before the war started in July: “In the country old church clocks rasped out the hour; the rusty sound went over fields that were red with clover, and up went the rooks as if flung by the bells” (TY 212). This time it is rooks rather than butterflies and bees that hover over the dreaming fields, and although rooks are usually positive indicators of rural England for Woolf, the rusty sound spreading over the red fields could be a portent of the death to come in the red fields of Flanders.[2]

Woolf’s last reference to clover, in her final novel Between the Acts, extends the ambiguity of clover, connecting its spring blooming and harvest with the inevitable cycle of the seasons.  Slightly depressed, his mood entering “the minor key,” old Bartholomew joins the refrain linking characters during the pageant’s interval:

For this day and this dance and this merry, merry May
Will be over . . .
With the cutting of the clover this retreating and advancing. . .
Will be over, over, over,
And the ice will dart its splinter, and the winter,
O the winter, will fill the grate with ashes,
And there’ll be no glow, no glow on the log. (BTA 81-2)

Interrupted by swifts which “seemed to have shot beyond their orbit” like the butterflies and rooks that danced over the fields, the song links Woolf’s sunset vision of the Sussex clover being cut to the May blooming of the clover before the war, suggesting that the red glow of health, prosperity, and happiness may be dimmed.

[1] A University of Sussex website on gardening to attract bees states that “A staple of bumblebees in the wild, red clover used to be a very common UK plant.”  http://www.sussex.ac.uk/lifesci/goulsonlab/resources/flowers Accessed 3/25/20.
[2] See Ian Blyth’s article on “Woolf, Rooks, and Rural England” for a review of her attitude towards rooks.