There are over a hundred species of Hydrangeas, a flowering shrub native to eastern Asia, with a few species also growing in North and South America. Hydrangeas come in white or in colors ranging from pink to tones of blue and purple, the exact shade depending on the acidity of the surrounding soil, which affects the uptake of aluminum ions: dressing with aluminum sulfate increases the acidity and turns certain species blue, while dressing with lime reduces acid and pushes others towards pink (Hogan 716). Some hydrangeas have flower heads that are round and look like poms-poms; the “lace caps” are flatter, and there are also climbing varieties. All varieties are made up of two kinds of flowers: the tiny flowerets, often in the center of the flowerhead, are fertile; they are typically surrounded by larger, more dramatic sepals, often  with four petals. Most have leaves with serrated edges and are deciduous. The most common species, the so-called “florist hydrangea,”is Hydrangea macrophylla (named for its big-leaf); climbing hydrangeas are usually Hydrangea petiolaris. The name “Hydrangea” comes from the Greek for water, hydros and jar, angos, which refers to the shape of the plant’s fruit, but is especially appropriate since, according to a site called ProFlowers, they require “constant moisture to stay happy, healthy, and blooming.”[1]  Hydrangeas generally bloom from late spring to mid-summer, though the flower heads can last into the autumn.

Hydrangeas were introduced into Europe in the 1700’s. According to Naomi Slade’s detailed history, John Bartram sent an American variety to England in 1736, but the Japanese varieties had to be covertly imported during the nineteenth century (17-8).  Although the famous Veitch nursery in England acquired some plants, they did not become popular until French breeders developed them. When displayed at the National Horticultural exhibition in Paris in 1901, hydrangeas became an immediate sensation (18).  However, according to Slade, the UK lagged behind in appreciation, partially because early French varieties were bred for growth in pots and consequently “didn’t always perform well when transferred to the garden” and so “got a reputation for not being hardy" (19).

Because hydrangeas were introduced into England comparatively late, near the end of the eighteenth century, they have left little trace in folklore or literature. None of my usual sources on the cultural meanings of flowers have anything to say about them.  In fact, what symbolism is attached to them seems fairly negative. Greenaway lists their meaning as “A boaster. Heartlessness”(22), and ProFlower concurs, saying that they “were used to declare arrogance and boastfulness,” speculating that the association was based “based on the ability of the plant to produce many flowers but very few seeds.”  The attribute of infertility was extended even further as “English men in the later 1800s used to send hydrangeas to women who rejected them, accusing them of frigidity,” an account repeated by Naomi Slade in her book on hydrangeas (8)

For Woolf, the chief attribute of hydrangeas appears to be their blueness.  Nine of the thirteen times they are mentioned in her writing they are specifically blue.  They first appear in print in the essay on the fascinating “Miss Ormerod,” pioneer etymologist and inventor of Paris Green, a highly toxic insecticide also used in killing rats in the Paris sewers. When an acquaintance, Miss Lipscomb, stops to paint the “lovely hydrangeas against the sky” in Penzance, she learns from the local market gardener that he owes “everything he had” to a lady who, when his flowers and crops were failing, sent him a book called “In-ju-ri-ous In-sects” which saved his livelihood (E4 136, 137). While the color of these is not specified (a google search of “hydrangeas + St. Ives or Penzance” shows a distinct tendency to pinkness), the hydrangeas which show up in Mrs. Dalloway, the proofs of which Woolf was revising as she wrote “Miss Ormerod,” are distinctly blue.

Sally Seaton and Peter Walsh are the characters linked to “blue hydrangeas” in Mrs. Dalloway. Writing a “long, gushing letter” about “blue hydrangeas” to Peter, Sally Seaton boasts of having “married a rich man” and living “in a large house near Manchester,” and declares that the flowers make her think of Peter “and the old days” (70), a letter Peter later recalls as he thinks of how Clarissa “had influenced him more than any person he had ever known” (150). Associating Clarissa in his mind with “one scene after another at Bourton,” he mediates on how memories can be sparked “by the oddest things” such as Sally’s connection of him with blue hydrangeas (150, 149).  Later, when Sally arrives at the party, she tells Clarissa she has “five enormous boys,” and Clarissa reflects “She had the simplest egotism, the most open desire to be thought first always” (167). When Sally and Peter meet, Sally continues to “go on . . . hour after hour,” talking about how people thought she had married beneath her, her five sons, and her acres of greenhouses in which she grows hydrangeas, among other rarities (186). In these passages, hydrangeas are clearly linked with Sally’s boastfulness, but also, though various tunnels, back to the edenic gardens of Bourton, whose squeaking hinges, French windows, rising rooks, and tobacco flowers (3, 184) have Cornish roots.

The next mention of hydrangeas, in a diary entry of April 1930 about a visit to the vast Waddesdon greenhouses in Aylesbury, Buckinghamshire,[2] emphasizes the obsessive preoccupation with blueness among specialist gardeners.

Seeing “rows of hydrangeas, mostly a deep blue” Woolf talks to Mr. Johnson, the head gardener and learns that once again the domain of hydrangeas is ruled over a powerful woman, Alice Charlotte von Rothschild, aka “Miss Alice” (D3 301).  As Woolf observes, Miss Alice “wouldn’t have . . . a trace of pink” in her hydrangeas -- “it wouldn’t do” (301).  This somewhat arrogant desire to utterly control nature prompts a brief contemplation of the dangers of obsession on Woolf’s part: “It struck me, what madness, & how easy to pin ones mind down to the blueness of hydrangeas, & to hypnotise Mr Johnson into thinking only of the blueness of hydrangeas. He used to go to her every evening, for she scarcely saw anyone, & they would talk for two hours about the plants & politics. How easy to go mad over the blueness of hydrangeas & think of nothing else” (301).

After this intensive encounter, the subsequent occasional appearances of hydrangeas seem rather random.  There were hydrangeas at Monk’s House. In 1928, the year the size of the garden was doubled by the purchase of the adjoining terrace, Leonard bought at least one, and in 1935 he purchased five, a year or so after paving the side garden by the front gate, now known as the “Italian Garden”(Sparks, “Leonard’s Vegetable Empire” 15). In her account of the grounds at Monk’s House, Carolyn Zoob notes that archival pictures show that at least one pot in the Italian Garden was planted with a hydrangea. A photo in Spater and Parsons shows several potted hydrangeas in this area, around the pond overlooked by the statues of French shepherdesses (pl. 138, p.166).  Woolf may have been anticipating her own hydrangeas when she asked Vanessa whether the hydrangeas were blooming in the Borghese gardens while her sister was in Rome in late April of 1935 (L5 386).

Two late fictional pieces mention hydrangeas in passing.  “The Searchlight,” originally written in 1929 and much revised (see CSF 310), tells a story within a story of a wartime searchlight reminding a woman of an incident when her grandfather looked through a telescope and saw a man and a women kissing in front of a farmhouse with “tubs on either side of the door. . . with flowers in them blue, pink, hydrangeas perhaps” (CSF 271). Laura Marcus has argued convincingly that this story is about processes of memory that Woolf explored throughout her career but especially in her memoir, “A Sketch of the Past,” specifically about the way in which memories are encapsulated in the particulars of an otherwise random scene. As in Mrs. Dalloway, the hydrangeas serve as part of the scene that links past and present. Mrs Ivimey, the teller of the tale, identifies so strongly with her story that she imitates the movements she is narrating: “Mrs. Ivimey opened her arms and then closed them as if she were kissing someone” (CSF 272). When she is caught for a moment in the shaft of the searchlight, she “had something blue on her head” as if she still retains a scrap of the hydrangeas (272).

Woolf’s last hydrangea also serves to illuminate a passing moment. In Between the Acts, as Isa stalks out to the greenhouse after a brief quarrel with her husband in which she rebukes and rejects him over his inevitable impending infidelity, she puases for a moment just inside the door where William Dodge, following her, sees her “standing against the green glass, the fig tree, and the blue hydrangea” with a knife in her hand, a vivid, almost pre-Rapaelite vision of a “statue in a greenhouse,” ambivalent in its connotations of fertility and infertility, arrogance and despair (BTA 78).[3] 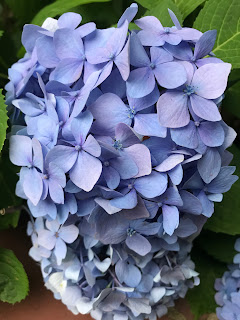 [2] According to an on-line history of the Waddesdon Glasshouses by garden historian Sophie Piebenga, the main glasshouse, “known as ‘Top Glass’ was made up of fifty different compartments. . . . Beyond this was a huge, 400 ft. long wall with a ‘lean-to’ glasshouse, the so-called Fruit Range. This long glasshouse was divided into nine sections, devoted to the production of fruit including: cherries, figs, grapes, peaches, vines and strawberries.” (One can see why Leonard Woolf would be particularly interested.)  During the war, the greenhouses sold produce to the surrounding communities, but “the operation was scaled down” in the late 1950’s when the family moved elsewhere and the glasshouses were torn down in the 1970’s.  The grounds can still be visited.

[3]  I have slightly misquoted Woolf here: William Dodge is thinking about women in general resenting “serving as statues in a greenhouse” when they learn that he is gay and not attracted to them. But I felt the image of the statue was particularly relevant to Isa.